In recent years, novel dosage forms such as amorphous, mesomorphous, nanocrystalline compounds and solid dispersions have attracted increasing interest in the pharmaceutical discovery pipeline. This is mainly due to their improved solubility compared to their crystalline counterparts. They contribute to solving oral bioavailability issues that very often impede a medicine’s progress from laboratory to market, and they are opening up new perspectives for some discarded active pharmaceutical ingredients (API). However, the lack of a crystalline long-range order of these compounds raises significant issues in finding appropriate analytical techniques to characterize their structural properties and challenges the quantification of mixtures thereof via conventional laboratory or synchrotron x-ray powder diffraction.

In pharmaceutical development, the accurate control of drug composition is crucial, since any deviation from the expected formulation can lead to dangerous side-effects for the patient. Quantitative phase analysis (QPA) via synchrotron X-ray powder diffraction (S-XRPD) is one of the most powerful methods for directly detecting and quantifying phase components of a mixture in its solid state [1]. Unprecedented levels of detection of crystalline API in pharmaceutical mixtures were recently achieved with synchrotron XRPD using unconventional beamline optics [2]. However, the technique reaches its limits when it comes to quantifying compounds with only short-range order.

The long-range order of a crystalline compound is reflected in its diffraction pattern as a series of characteristic sharp Bragg peaks, which uniquely identifies the material and enables quantification. In contrast, amorphous, mesomorphous or nanocrystalline drugs do not exhibit any long-range order and their X-ray diffraction patterns only include broad halos instead of sharp Bragg peaks. For such samples, even the simple identification of the compound from its diffraction pattern is a challenge. No arrangement of molecules of finite size, however, can be considered completely random [3]. Consequently, it is possible to make use of so-called total scattering techniques that interpret both Bragg and diffuse scattering, provided that we correct the broad signal from the samples from instrumental background of any kind. 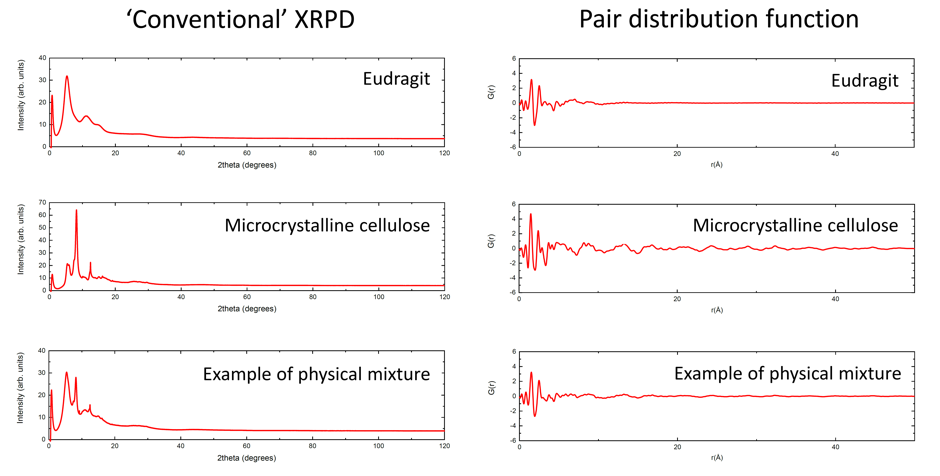 Excelsus has recently demonstrated that it was possible to perform quantitative phase analysis on a mixture of poorly- and non-crystalline excipients via conventional S-XRPD and pair distribution function analysis, provided that the experimental setup, data collection and analysis strategy were carefully optimized. Samples were produced by the group of Professor Raj Suryanarayanan (about research group) and Dr. Naveen Thakral (both University of Minnesota when the work was conducted) within the framework of a collaboration with Excelsus. An algorithm based on principal component analysis was used for performing the quantification. As expected, more accurate results can be obtained using the emerging pair-distribution function technique compared to conventional XRPD analysis.

The pair distribution function technique pushes the limits of conventional synchrotron XRPD. Optimizing synchrotron XRPD for PDF applications, however, requires prioritizing some technical aspects (extremely high counting statistics, very high photon energies) over others (high angular resolution, very low background). As a consequence, beamlines worldwide tend to be optimized to strongly favor one or the other. Beamlines specifically designed for pair distribution function analyses operate at very high photon energies in order to increase the PDF resolution, but at the expense of angular resolution due to the choice of the detection system. Detecting early crystallization in amorphous pharmaceuticals, therefore, can be compromised. Synchrotron XRPD at the Swiss Light Source, in spite of not being optimized for high resolution PDF analyses, provides an ideal compromise between ultimate level of detection (LOD) of crystalline phases and quantification via the PDF approach.

[2] Gozzo, F. (2018) “The Power of Synchrotron Powder Diffraction for the Characterization of Pharmaceuticals”, Pharmaceutical Technology, 42, 18.

About the author: Dr. Reinle-Schmitt is a scientist at Excelsus Structural Solutions (Swiss) AG. She earned a Ph.D. in Experimental Physics at University of Zurich and Paul Scherrer Institute (PSI). She has more than 5 years of practical experience with synchrotron radiation instrumentation and technique, particularly in the field of powder and surface diffraction. She is involved in the development of methods and measurement strategies mostly related to quantitative phase analysis and pair distribution function measurements of pharmaceuticals via synchrotron-radiation x-ray powder diffraction.