The European Union (EU) has realized that too few newly developed products are making it onto the market in Europe. For this reason, it is utilizing the "SME Instrument" to promote innovative small and medium-sized enterprises (SMEs) wanting to put revolutionary products and services on the market. This way, the EU intends to support such companies in their innovation work and internationalization. What many do not know is that unlike Swiss CTI project support, the funds are given to the company alone, without the scientific partner. In this blog post, we will introduce this new promotional tool and give some tips on how to be successful with it.

The EU has declared that the SME Instrument is primarily designed to promote forward-looking projects with international market potential. Swiss companies can also benefit from it as Switzerland has been a part of the Horizon 2020 program since the ratification of the Croatia Protocol. Projects with a realistic chance of being funded are thus those that are innovative and can generate high and rapid market growth – that are real "hidden champions". In order to be eligible for support, the applicant must already have developed a functional prototype or product that corresponds to "TRL 6" (Technology Readiness Level) by the time the project is launched.

The SME Instrument is broken down into three phases; in the context of the program, it is possible to receive up to 70% in non-repayable grants, with a maximum of up to €2.5 million in direct funding. The instrument is particularly interesting because decision-making process is quick and transparent and the funds are thus quickly allocated to the chosen projects. 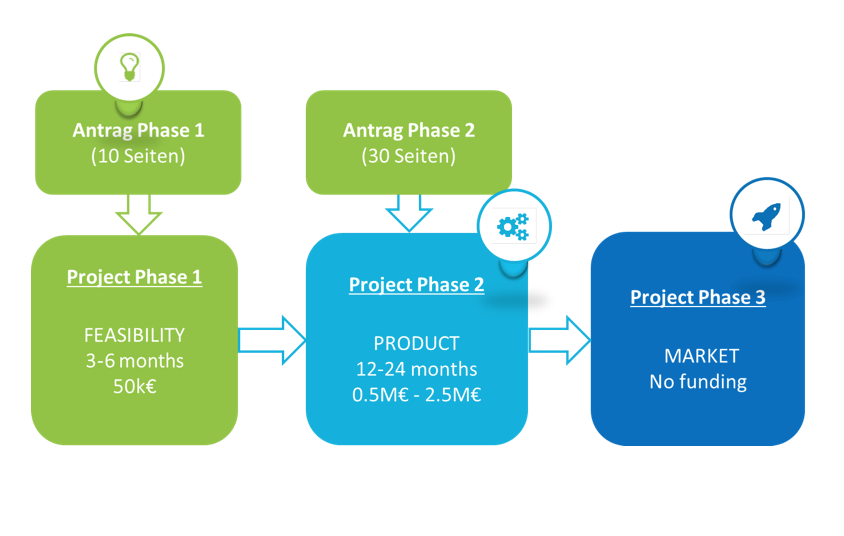 Phase 1 is about the feasibility of the project. Here, a lump sum of €50,000 is provided to fund an economic feasibility study that may last up to a maximum of six months. The objective of Phase 1 is to assess the project proposal. The focus of this feasibility study is on the commercial implementation. At the end of Phase 1, a Business Plan should be in place that forms the basis for the application in Phase 2 of the SME Instrument.

Phase 2 is then about implementing the concept up to the point of marketability. Here, funds are made available of up to €2.5 million for the implementation, the market launch and all the associated activities of the innovation project.

Phase 3 is for commercializing the project. This phase does not provide any direct funding but supports the enterprise in its search for capital investors.

The assessment of the projects in Phase 1 and Phase 2 primarily addresses aspects such as the market potential, the European added value, and the unique selling point. In addition, these phases examine the applicants' development potential and their internationalization strategy.

The attractive funding rate makes the SME Instrument one of the most sought-after innovation support schemes of the EU, which at the same time also means that there is a great deal of competition among the applicants. It is therefore important not only to have a good project idea but also to present it in such a way that it clearly stands out from the competition – in the categories "Excellence," "Impact" and "Implementation".

The "Excellence" section emphasizes the technological characteristics of the project, particularly to what extent they signify a real advancement and constitute an improvement. In this respect, it is also important to specify relevant numbers (for example energy consumption savings, time improvement for production processes, cost savings by introducing new technologies, etc.).

The "Impact" section requires you to prove that there is indeed – or can be – an interesting market for the new product and how you intend to address this market. If the project is intended for small niche markets, this will reduce your chances of succeeding. This section is also supposed to describe the "Impact" of the project for the SME.

And last but not least: the "Implementation" section describes how the project is to be carried out and especially also who is behind the project.

It is also important to mention that the SME instrument is only thought for already established companies whose projects have a certain degree of maturity. Thus, it is not directly relevant for freshly founded start-ups that are still working on a product idea or a business model. However, if the homework is done here, the SME tool is also a very interesting way for start-ups to generate funds for innovation projects without having to bring external investors on board at an early stage while giving control over their own venture.

About the author: Javier Calvet-Stoffel co-founded Spain's first management consultancy specialized in funding, based in Madrid and Brussels. Starting in 2002, he led the internationalization strategy of the company, mainly in Central and Eastern Europe, with its registered office in Vienna. After the company was sold in 2009, Mr. Calvet-Stoffel worked as an independent consultant and investor, with projects in Austria, Spain, and Latin America. Since 2013, he has been head of the EU department of the company M27 Finance, based in Vienna. In more than 25 years of professional experience, Mr. Calvet-Stoffel has supervised several hundred projects, predominantly in the fields of R&D, innovation, environmental protection, energy, financing, internationalization and advanced training.

To improve their success with the SME Instrument, companies often need professional support. With a success rate of almost 60% (compared to the EU average of 7%), m27 – in cooperation with its partner Inspiralia – can call itself an expert on the SME Instrument. Of about 50 successful Austrian projects so far, m27-Inspiralia has been involved with more than half; along with the last four cut-off dates for Phase 1, 18 of the 23 Austrian projects receiving funding were submitted by m27-Inspiralia. Throughout Europe, m27-Inspiralia has supervised nearly 350 successful projects.