A quick thought experiment: imagine you take an empty gas cylinder and fill it up with a solid material. Et voilà, now the gas tank can store even more gas than before! Sounds bizarre, right? Well, let us introduce you to the world of Metal-Organic Frameworks (MOFs).

Metal-Organic Frameworks (MOFs) are the next generation of highly-porous materials which outperform the conventionally used activated carbon, zeolites and silica gels in a multitude of different physico-chemical aspects. MOFs are versatile materials and attract broad interest in both academic and industrial research due to their plethora of applications in different industrial fields. One of the most promising markets is gas storage, where innovative applications are made possible through MOFs.

Natural gas is considered a benign alternative to liquid fossil fuels, which are to date the main source of energy for transportation, power generation and heating. In recent years, the exploitation of shale gas has been gaining momentum. Therefore, the demand for a more efficient way to store the extracted gas is rising. Conventional methods rely mainly on either gas compression or gas liquefaction. The drawbacks of both methods are the inherent safety aspects of storing vast amounts of compressed gas, and gas liquefaction itself is an energy- and cost-intensive process. A viable solution for these problems is adsorptive gas storage. MOFs comprise a low density (weight per volume) while offering high surface areas: surface areas can range up to 10,000 square meters (roughly one soccer field) per gram! Hence, MOFs are seen as ideal materials for gas storage technology. The gas molecules interact with the surfaces of the pores and are subsequently stacked inside the framework, which allows an increased packing density. This additional adsorption effect explains the increased gas amount per container in the aforementioned thought experiment.

MOFs have already been successfully employed in natural gas vehicles (NGVs) and stationary methane storage to achieve higher tank capacities. In 2007, a natural-gas-powered car equipped with a MOF tank successfully participated in the EcoFuel Asia Tour going from Germany to Thailand. The MOF container showed 30% higher storage capacity compared to conventional pressurized containers that yielded in an increased driving range of approximately 20%. More recently, a specific MOF (MOF-519) was described as having exceptional natural gas storage capacity; the cylinder with MOF-519 could store three times the amount of methane compared to the “empty” one.1

Although natural gas is proving to be a good alternative to liquid fossil fuels in the medium term, hydrogen seems to be one of the most promising energy carriers for the future. It exhibits the highest energy density by weight (for example, hydrogen carries 142 MJ/kg while diesel and methane carry around 48 and 56 MJ/kg, respectively). One of the biggest issues besides the safety aspects, however, is its energy density per volume. Present hydrogen storage technologies for mobile applications compress the hydrogen to high pressures up to 700 atmospheres, which finds low customer acceptance. Also in this case, MOFs are one of the most promising adsorption materials for storing hydrogen at low pressures (around 100 atmospheres) and are being extensively studied to build safe and efficient hydrogen tanks of the future.

The development and industrial application of adsorption storage technologies depends a lot on the high-quality and scalable production of the material. A spin-off from the Paul Scherrer Institute (PSI), novoMOF AG has developed a highly-efficient production method for Metal-Organic Frameworks. The company has optimized the heat management system and established a continuous-flow process, allowing for scalable production of high-quality customized MOFs.

The company, partnering with leaders from different industries that are exploiting MOFs early as an innovation opportunity, has been working together with companies in the energy, catalyst manufacturing, environmental and medical device sectors. Gas storage is not the only possible application of the material: for example, customized MOF compounds can assist in greatly reducing the charging times of batteries, can prolong the lifetime of packaged food, or can be used to separate and purify gases such as carbon dioxide. 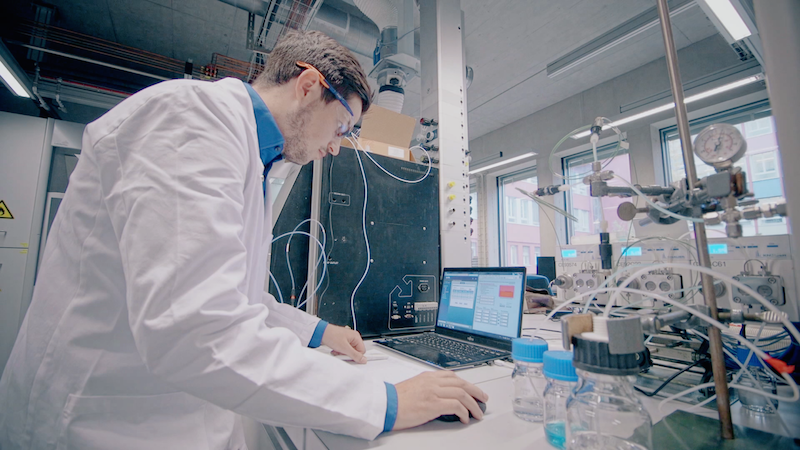 The team was awarded the “venture Business Idea” award in 2016, was in the finals of the Swiss Technology Award 2016 in the category “Inventors”, was nominated for the “Pionierpreis 2017” and has been actively supporting the academic community by sponsoring major conferences on MOFs (5th International Conference on Metal-Organic Frameworks & Open Framework Compounds (MOF 2016) and 2nd European Conference on Metal-Organic Frameworks and Porous Polymers (EuroMOF2017)).