Methanation – the key to the natural gas grid

Today, the natural gas grid is used for distributing natural gas and a minor fraction of biomethane. They are used in high thermal processes in industry, for fueling compressed natural gas (CNG) cars, and for heating buildings, partly in combined heat and power plants. Since heating consumes by far the most gas, there is a strong seasonal difference in the consumption. However, compared to the electricity grid, the gas grid has a relatively high flexibility: supply and demand do not need to be equal at any given moment. Instead, the gas grid can “breathe” by adapting the pressure in the transport lines to a certain extent. Thanks to this flexibility and processes such as methanation, the natural gas grid can help overcome the challenges connected to the fluctuating nature of renewable sources of energy.

Two questions arise: how can the existing infrastructure of the natural gas grid contribute to the energy transition, and – very importantly – how can it be supplied with renewable content?

The share of renewables on today’s energy market has been raising significantly for the past few years. However, their full potential will not be used unless we learn how to preserve harvested energy. The natural gas grid, for example, can support renewable mobility. It can also be used to provide flexibility to the electricity grid. As shown in figure 1, the natural gas grid can help balance the electricity grid when supply and demand do not match. Produced during the surplus periods, renewable methane can be stored and distributed in the gas grid and then used when the demand is high. In addition, the combined production of heat and electricity in buildings has the advantage of much higher overall efficiency than pure electricity production. Thermal storage in the building then makes it possible to decouple the times of heat/electricity production and heat consumption. 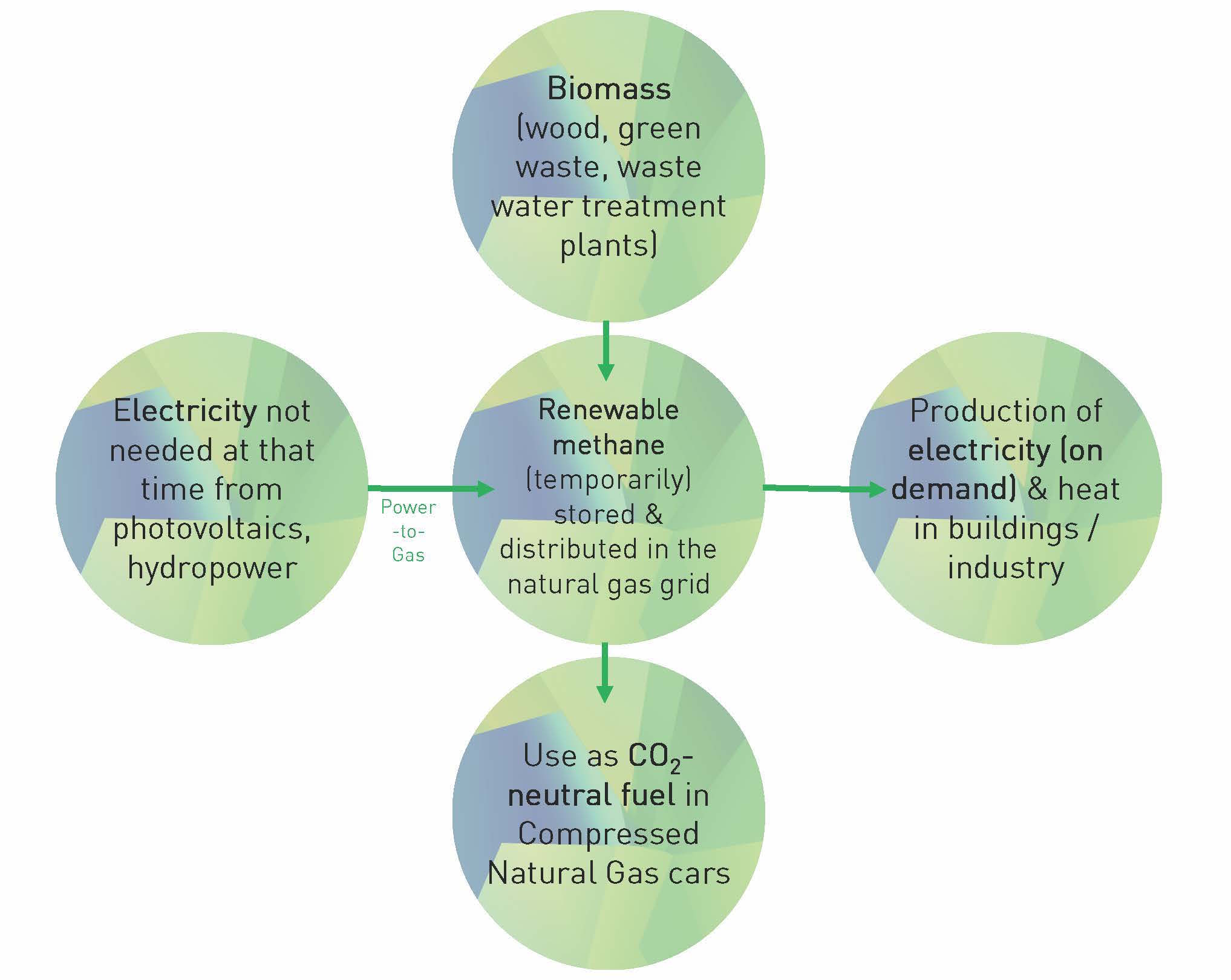 The above-mentioned flexibility options can unfold their potential contribution to the energy transition only if the renewable content in the grid is significantly increased. One option is to inject the hydrogen from Power-to-Gas plants immediately into the gas grid as it is done, for example, at the Hybridkraftwerk Aarmatt in Solothurn. Today, however, the hydrogen content in the gas grid is restricted by regulations to 2 vol%, which represents an inconvenient limitation to the injectable hydrogen flows, given that most hydrogen from Power-to-Gas is expected to be produced in summer, where the volumetric flow in the gas lines is low due to the low consumption. To allow unrestricted injection into the gas grid, it is therefore necessary to respect the injection specifications asking for more than 96 vol% of methane content and less than 2 vol% of hydrogen. This is where methanation process comes in play.

Half as much of biomethane

Figure 2 shows the main pathways to producing such a gas mixture. Today, biomethane, i.e. renewable methane, production is dominated by anaerobic digestion of sewage sludge and green wastes (such as Kompogas®), which produces a mixture of mainly methane (55-65%) and carbon dioxide (35-45%). A similar gas mixture can be obtained by the gasification of dry biomass, such as wood residues, followed by gas cleaning and methanation, a reaction which converts the carbon oxides in the gasification gas with hydrogen to methane and steam. In any case, the subsequent separation of the carbon dioxide (and residual hydrogen) from the methane and drying are necessary. This gas upgrading is often carried out by means of amine scrubbing or membranes. 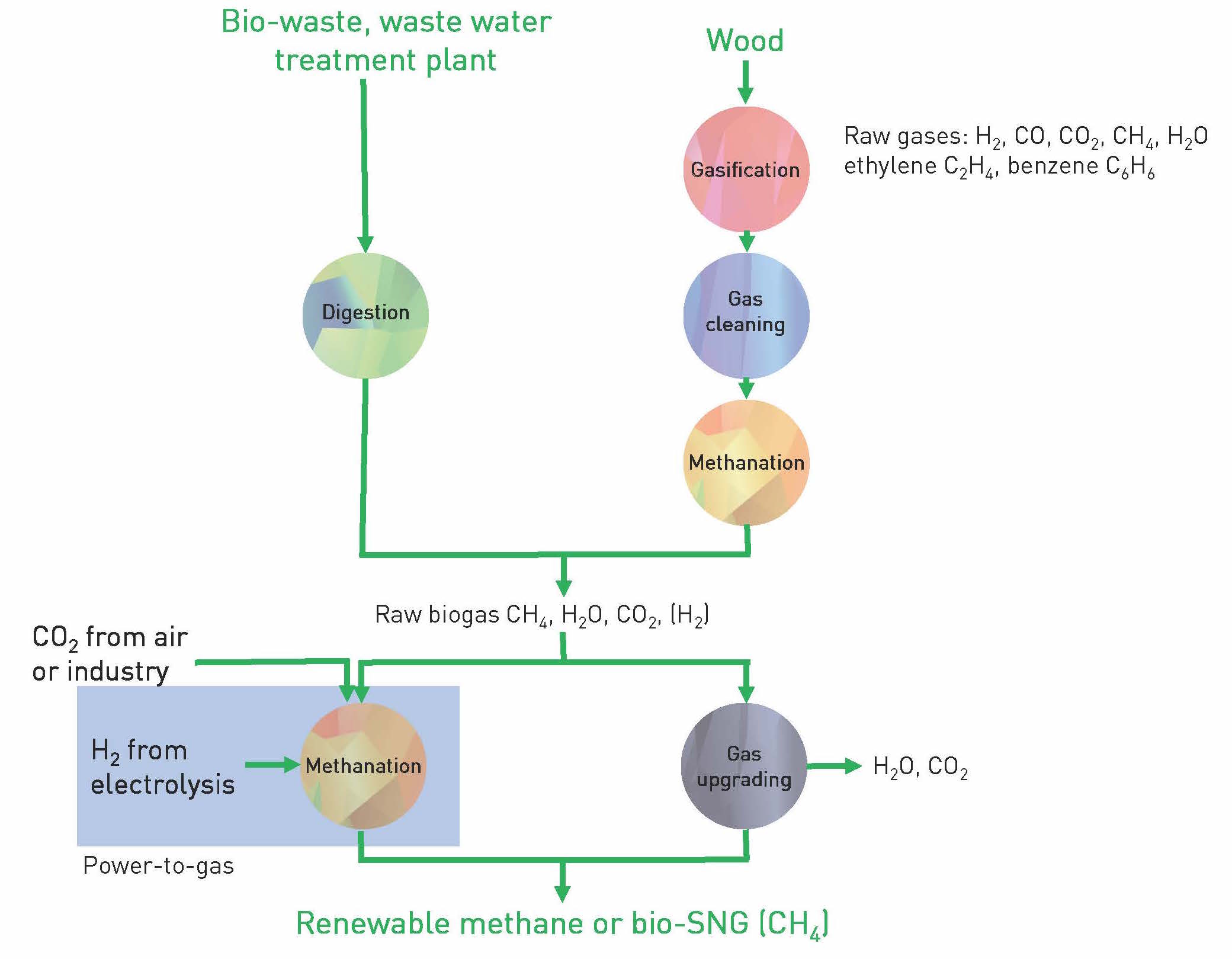 While this is the state of the art in biomethane production, it has the disadvantage that up to 40% of the biomass carbon is released to the atmosphere as carbon dioxide. Adding a methanation step makes it possible to convert also this carbon dioxide to biomethane, i.e. the biomethane yield from a certain amount of biomass can be increased by at least half. The necessary ingredient is “green” hydrogen, which reacts with carbon dioxide to form methane and steam in accordance with the strongly exothermic methanation reaction (also known as Sabatier reaction):

The green hydrogen is best produced by water electrolysis close to the biogas/CO2 source using renewable electricity. Besides raw biogas, the methanation step can also convert pure CO2 streams that have been obtained by separating CO2 from flue gases (such as those from cement plants or waste incineration plants) or even from the atmosphere.

At the moment, three major technologies are being considered for methanation, which use either nickel-based catalysts at temperatures above 300°C (catalytic methanation) or microorganisms at 40-70°C (biological methanation) to convert CO2 and H2. The chemical efficiency of methanation reactors is around 80% due to the exothermic character of the methanation reaction. In the technically relatively simple biological reactors, this off-heat is obtained at low temperatures, which makes it difficult to use the heat. In catalytic reactors, the heat of reaction and of condensation is available at around 250°C and 150°C, respectively – at some sites, these heat flows have a real value that helps create the business case. There are several pilot plants for biological methanation. The title image (middle) shows the 500 kWSNG plant of the BioCat project in Denmark with the nearly 9 meter-high reactor in the tower. The catalytic reactors mainly differ in the way catalyst and gas are brought in contact with each other and in the way the heat is removed. In (cooled) fixed-bed reactors, the catalyst is arranged in tubes that are cooled from the outside. A large-scale plant (3 MWSNG) has been built in Werlte/Germany (title image, right).

The other catalytic methanation technology has been undergoing development by the Paul Scherrer Institute (PSI) for more than 15 years. The catalyst is contained as powder in the reactor through which the reactant gas flows up from the bottom. As a result, the catalyst particles are suspended in the up-flowing gas; the gas-particle mixture now behaves like a fluid, which strongly facilitates mixing and heat transfer to the immersed heat transfer tubes. This reactor type, known as a bubbling fluidized bed, makes it possible to completely control the temperature inside. Hot spots can be avoided, and relatively simple thermal oil cooling can be applied. While catalytic reactors are about one order of magnitude smaller in volume than biological methanation reactors, the bubbling fluidized bed reactor can be designed to be at least two times smaller than a fixed-bed reactor due to the better heat transfer. PSI has tested the fluidized bed technology both for the methanation of gasification gas and for biogas-Power-to-Gas in long duration experiments of 1000 and 1100 hours, respectively. The new 200 kWSNG pilot scale plant at PSI (see title image, left) will allow the Institute and interested industry companies to explore the potential of this flexible technology for further costs savings and higher performance. 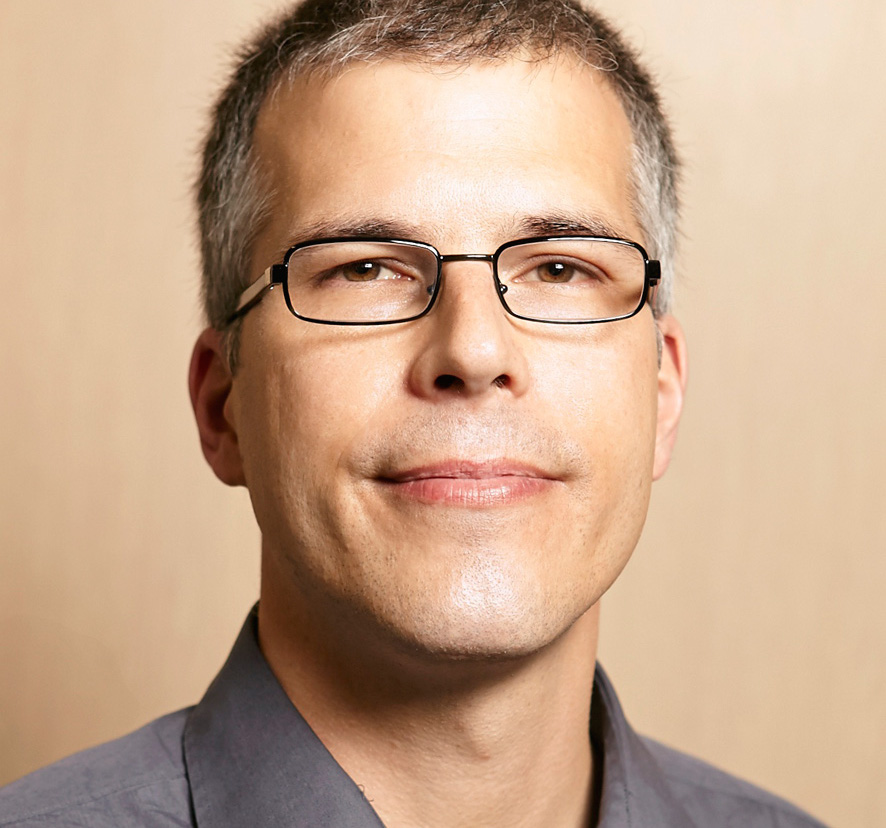 About the author: A chemical engineer by training, Dr. Tilman Schilhauer conducted research in catalytic reactor optimization for several years in Switzerland and The Netherlands. In 2005, he joined PSI as Senior Scientist and became responsible for the research in catalytic methanation. Since 2014, he has also been a science case coordinator of the Energy Systems Integration (ESI) platform of PSI, where energy conversion technologies are investigated and demonstrated in pilot scale.