At CERN, the doors are wide open for technology transfer

Giovanni Anelli, Head of the Knowledge Transfer Group at CERN, explains how the international organization promotes the establishment of start-ups.

The research at CERN (Conseil européen pour la recherche nucléaire, English: European Organization for Nuclear Research) is based on the operation of particle accelerators. To understand what happens during and after the collision of particles with other elements or fixed targets, scientists need particle detectors. The detectors produce an immense amount of data that needs to be stored and analyzed. This in turn requires enormous computing power, which can only be mastered with the help of large computer systems.

Based on CERN's core competencies such as radiation, cooling, ventilation and materials technology, scientists use accelerators, detectors and information technology to generate research results that are incorporated into the fields of medical and biomedical technologies, aerospace, security, industry 4.0, cultural heritage and new technologies. 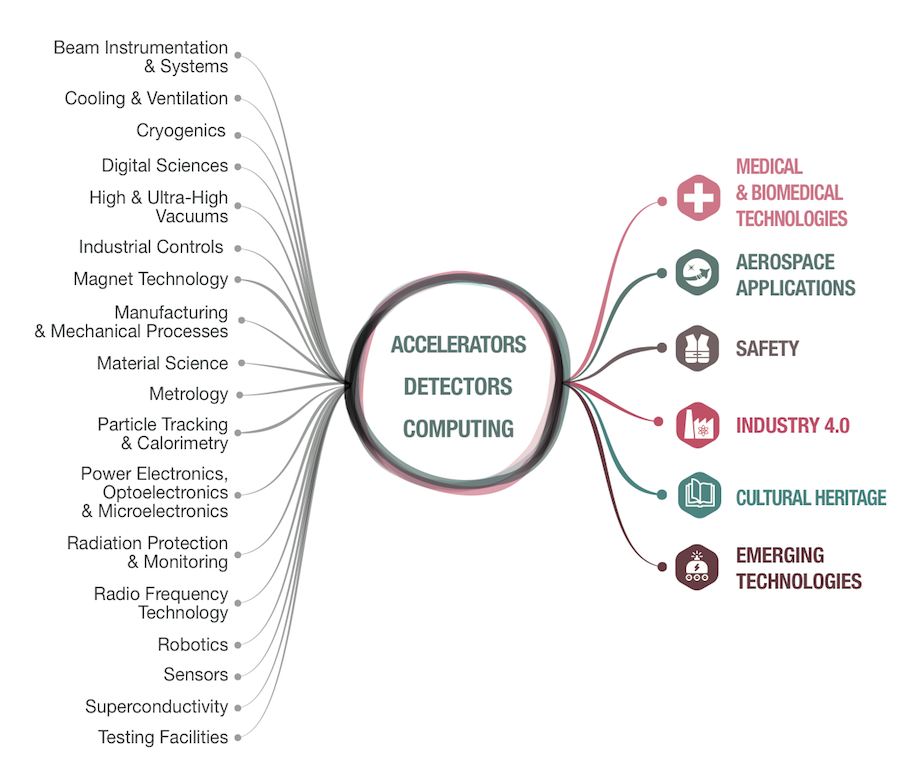 CERN's advanced technology is finding its way into various areas of the economy and society. © CERN

In the field of medical and biomedical technologies, for example, radioisotopes are being produced that improve the precision of imaging procedures and the treatment of patients. Isotopes required for medical research, some of which are manufactured exclusively by CERN, will then be available to clinics and research centers in Switzerland and other European countries. This will improve the quality of medical care.

The Austrian institute MedAustron, for example, has developed a particle accelerator in close cooperation with CERN for use in radiation therapy that enables the gentle treatment of cancer patients. Ion therapy is particularly suitable for the treatment of tumors located near radiation-sensitive organs such as the brain and spinal cord, eyes, liver and lungs.

Aerospace technology also uses a wide range of applications developed on the basis of CERN research. The European Space Agency (ESA) and the French Center for Space Research (CNES), together with their industrial partners, have tested components that are being used in space missions. This virtually involved simulating the radiation conditions of space.

In safety technology, CERN's unique conditions – different radiation, extremely low temperatures, ultra-strong magnetic fields and very high voltages – are also opening up new possibilities. The Swiss start-up Neasens, for example, is developing inexpensive methods for monitoring exposure to radon. The natural, odorless and colorless gas poses a safety and health risk when it accumulates in buildings. Neasens is developing sensors based on CERN technology that will later monitor radon exposure.

CERN technologies are also playing a role in the massive changes that will accompany the Industry 4.0 trend. On the one hand, CERN will benefit from the increasing automation and efficiency of the manufacturing processes in industry. On the other hand, the private sector can benefit from CERN's technical achievements. For example, CERN and LG Display have signed a license agreement allowing the leading screen manufacturer to use middleware software to advance automation in LG factories.

Accelerator technologies where you don't expect them to be

At first glance, cultural heritage has little in common with the work being carried out at CERN. Not at all: one example of the use of CERN technology in this area is the chip developed by the Medipix collaborations. Art curators, restorers, galleries, auction houses and other art science experts are using state-of-the-art X-ray technology, including color imaging, to inspect paintings. High-resolution spectral information provides data on the condition of paintings, paints and lacquers used, but also forged metal parts. InsightART, a start-up from Prague, is marketing this technology.

CERN scientists and engineers are also working on new technologies that will play a significant role in the future. In this context, the cooperation with industry will be particularly important with a view to maximizing the benefits of such technologies for society. At low temperatures, certain materials increase in conductivity. The conductivity of these materials is many times higher than that of conventional wire. The Large Hadron Collider at CERN, the world's largest and most powerful particle accelerator, requires such conductive materials to be able to function. Of course, these materials have long since found their way into products that are already in daily use today. The best example: magnetic resonance imaging, an imaging procedure that has become an indispensable instrument, especially in medical diagnostics.

Making sure that technology can be used

The Knowledge Transfer Group at CERN has a relatively small budget available for knowledge and technology transfer. It is also not CERN's main purpose to generate sales with licensing revenues, for example. The focus is much more on ensuring that technologies can be used by other institutions in the 22 EU member states.

CERN is now cooperating closely with PARK INNOVAARE. The newly created Swiss Business Incubator Centre (BIC) of CERN Technologies provides support for business start-ups related to accelerator technology. In the past, CERN worked more closely with existing companies. Now the organization attaches more importance to technology transfer through young companies. A logical step: CERN employs a lot of clever people who have developed good ideas. However, a large proportion of these talented people leave the organization after a few years. If a fraction of such scientists themselves take the step of becoming founders of a company, this in itself is a great success. In addition, knowledge and technology transfer is also available to external founders. In this way, they too can enjoy the benefits of CERN's advanced technology.

A network of incubators has been established for this purpose. In addition to institutions from other member states, PARK INNOVAARE is now part of this network. CERN gives this network access to intellectual property. PARK INNOVAARE's know-how will help with the transfer process to lead start-ups to success. And for companies that previously were unaware of CERN's capabilities, it will open the door to advanced technology. The BIC will significantly contribute to the success of the transfer in Switzerland.

About the author: Dr. Giovanni Anelli was appointed Head of the Knowledge Transfer Group in August 2011.Before, he worked for three years for LEM SA and prior to this he worked for 10 years in CERN’s Microelectronics Group, where he designed several integrated circuits for High-Energy Physics applications. Dr. Anelli received a M.S. in Electronics Engineering from the Polytechnic of Milan (Italy) in 1997, a Ph.D. in Electronics Engineering (with honors) from the Polytechnic of Grenoble (France) in 2000 and an EMBA from HEC in Paris (France) in 2008.